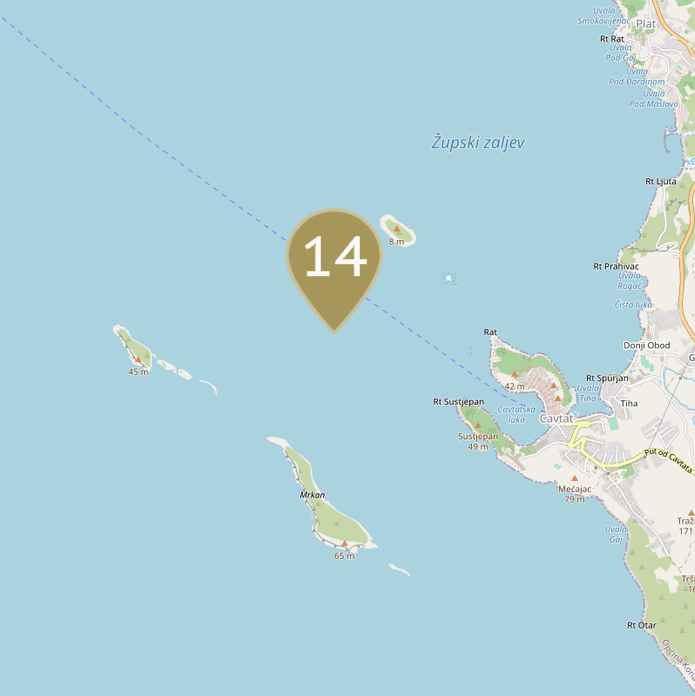 The Cavtat underwater archaeological zone encompasses the following area: the western cape of the islet of Bobara - the western cape of the islet of Supetar - the cliff of Šuperka - Seka Velika - the eastern cape of the islet of Mrkan. There are two registered ancient sites in the area: a site with large vessels called doliae and a site with North African amphorae, which is today protected by a metal mesh structure. Also, there are two recorded archaeological and historical sites: a scattered site with amphorae and the remains of a modern war shipwreck from the beginning of the 19th century. In the Cavtat waters, in addition to the listed sites, the entire area in front of the port was used as an anchorage, so there are individual finds in the wider area. Due to such a concentration of underwater sites and finds, the area in front of Cavtat was placed under protection. The sinking of a ship carrying at least 10 doliae dates back to the 1st century AD, while the sinking of a ship carrying at least 1,200 North African cylindrical amphorae with oil from Tunisia dates back to the 4th century AD. In 2001 the site with North African amphorae was covered with a protective iron cage and can still be visited by tourists. Another type of amphora called Lamboglia 2 was found in the Cavtat underwater area. This is the most common type of amphora found in the eastern Adriatic seabed. They were produced in northern Italy, and they transported wine from central and northern Italy to the east. The site dates back to the 1st century BC, but during archaeological excavations the construction of the ship was not found, so it is believed that the amphorae fell from the ship. Today, you can see about 20 of them in the Department of Archaeology of the Museums and Galleries of Konavle.