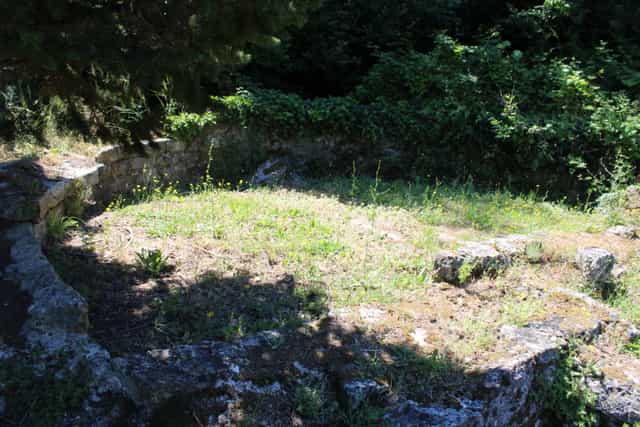 During archaeological excavations carried out in 1971 in Cavtat, for the purposes of building the Hotel Croatia, the remains of a possible villa maritima or a public building related to the port were found. It is a complex architectural structure that, following the slope of the terrain, descended towards the sea. The building cascaded over three terraces. Its width, in the east-west direction, is about 15 meters. On one of the levels in the eastern part, the architecture ends with an apsidal, semi-circular structure. The complex had a hypocaust, i.e. thermal heating, the floor surfaces were decorated with mosaics and wall paintings, while part of the building was most likely dissolved by a portico, but due to previously advanced works on the hotel construction site the exact dimensions of the assembly were never defined. Inside the complex, at a level closer to the sea, the remains of a cistern with hydraulic plaster were discovered. Over the centuries, the building has undergone various alterations, but the basic architectural division has been preserved. Movable archaeological material, such as fragments of pottery, amphorae, glass and the like, suggest that this complex was built in the early imperial period, more precisely in the 1st century AD. Other finds indicate the continuous use of space over the following centuries, as indicated by the findings of Justinian’s coins (527 – 565), as well as the coins of his successor Justin II the Younger (568 – 578) and the somewhat later coins of Roman III Anonymous (1028 – 1034). 13 tombs were discovered in the western part of the complex towards the bay. These are mainly late antique burials formed at a time when this architectural complex lost its original function. Tombs with skeletal burials are inserted between the existing walls in different directions, east-west or north-south, depending on how they fit into the earlier structure.